It’s 2009. You’re sat in the student union, listening to Razorlight or some other indie landfill band, constantly re-adjusting the crotch on your circulation-busting black jeans. Suddenly a man bursts through a wormhole from the future – 2019 to be precise. He calls himself an Instagram influencer, whatever the hell that is. He’s got some dad jeans on, mid-wash, the ones Jerry Seinfeld would wear with those dorky shoes. Apparently this is all the rage in 2019, but you laugh him out of the room.

It’s true though, Mr. 2009. Ten years and a rise in unpretentious fashion has made a style icon out of your old man and Jeremy Corbyn. Those dorky kicks are now chunky trainers, and every fashion hound has themselves a pair, while mid-wash jeans are the relaxed glue that holds normcore fashion together.

You don’t have to wear them like you’re in a nineties sitcom either. The worn-down look works well for dusty western-inspired style, another odd-but-somehow-works trend, while the relaxed appearance suits low-key streetwear looks.

By the way, when we say mid-wash we are referring to denim that has undergone a longer washing process to remove more of the indigo dye colour. The extra washing also means that these jeans are softer to touch than raw denim. Wear them slim for a defined silhouette that suits smart-casual, or wide-legged for the more casual.

Here are five looks that prove just how versatile mid-wash jeans can be.

75 million people watched the finale of Seinfeld in 1998. And we can tell you there weren’t many of those millions thinking, “My word I need to cop some of Jerry’s style right there”. But the nineties fashion resurgence has made a belated style icon out of the comedian.

The humble straight-leg works best for this look. Don’t pick up a pair that’s too long either, we’re channelling Seinfeld here not Clarkson, and too much length will swallow up the chunky trainers below. Pair with a simple sweatshirt or a white tee to avoid it looking like your heading off to a nineties club night.

If that’s not enough Seinfeld for you, a lengthy, wide-lapelled and double breasted jacket will channel one of Jerry’s stand-up looks while playing into another current trend – boxy tailoring. Now slap that bass. It makes sense that mid-wash jeans suit equally unpretentious styles. Before now skatewear’s last peak was in the 1990s, and the current sensibility closely apes that style. Pin-rolled jeans were originally born out of necessity, less any denim got caught in your wheels but now makes a fine way to channel the look while preventing unsightly bunches at your trousers’ hems.

A baggy white tee, not tucked in this time, contrasts with the jeans and gives off the could-I-care-any-less attitude that has made skatewear so popular. If it’s a little chillier pop on a hoody, preferably without any harder-to-nail logos or graphics on the front. 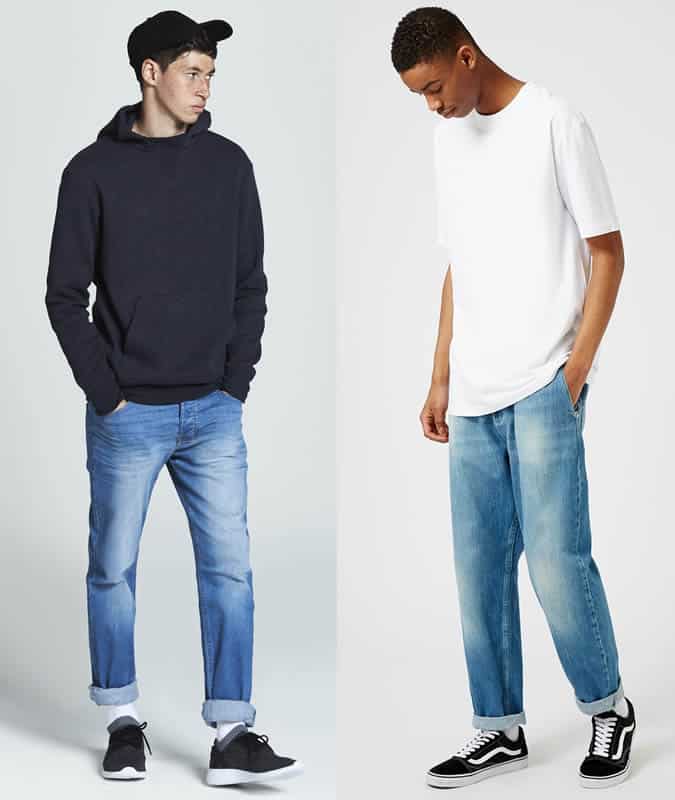 So far, so casual. But that’s not to say a mid-wash jean can’t effortlessly slide into smarter looks. The darker side of mid-wash works here, the more neutral shade (along with a tapered fit) substituting your tailored trousers nicely. Worn with the right knitwear and outerwear, the effect is an Italian or Riviera approach to winter dressing – which is to say elegant and not at all boring.

Leave the suit jacket at home and instead smarten up with a streamlined dark overcoat to tonally match the colour of your mid-wash jeans. Carry the wintry spirit through with a top-notch roll neck or V-neck, preferably in a lighter tone to contrast with the navy. It’s worth bearing in mind that finer gauge options are less casual than the chunky, but don’t go too thin or else you’ll be shivering like a camel in the arctic. Finish the look off with a sleek pair of Chelsea boots or brogues in a deep brown hue to compliment the colour of the denim. When it comes to smart-casual you’re traversing two styles so you want to make sure you’re getting the best of both. Jeans look best slim and cropped in this style, especially when you’re working some dandy, streamlined footwear down below. Take a slightly lighter shade in the jeans though so that the appearance is still a casual one.

Up top, you want it to come across as less stiff than smart so choose more relaxed fits and bolder shades while still sticking to failsafe overcoat and roll neck combinations. Alternatively, a simple but bold tee tucked in underneath an overcoat will work perfectly as a smart casual sub for a shirt. The western trend is a subtle variation on fashion’s lust for blue-collar workwear in the last few years, and looks best kept unfussy and less try-hard. Don’t be scared of the Canadian tuxedo for this one. Double denim usually works by pulling off two different shades between the top and the bottom. Recent styles have shown that this rule can be broken.

Keep the jacket a little loose and the silhouette underneath slim and trim. There was nothing baggy about John Wayne’s style and the contrasting shape adds depth to your ‘fit. Also think about a spot of borg or shearling in the jacket to echo those early frontiersmen and pick out a shirt or jacket in a bold colour to help it punch through the denim.